Paulo Magalhães Jurist and researcher at CIJE - Center for Legal and Economic Research, University of Porto. 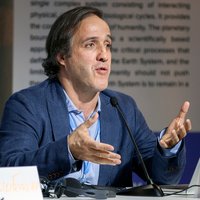 Dr. Paulo Magalhães is a Jurist and researcher at CIJE- Center for Legal and Economic Research - University of Porto. Dr. Magalhães holds a Degree in Law by the Catholic University of Porto, a graduate degree on Environmental Law by the University of Coimbra, a Ph.D. degree in Human Ecology from the Faculty of Social and Human Sciences, New University of Lisbon. In 2020, Dr. Magalhães finished a Pos-Doctoral program, at the Faculty of Law of the University of Porto, about the legal status of climate and the structural roots of climate emergency, based on the current framework of Common Concern of Humankind approach to climate change, as compared to the initial proposal of recognizing a stable climate as a Common Heritage of Humankind.
In 2007, published "The Earth Condominium: From Climate Change to a New Juridic Conception of the Planet". In 2016, was co-editor of the "SOS Treaty - The Safe Operating Space Treaty: A New Approach to Managing Our Use of the Earth System". He is the Founder and President of Common Home of Humanity, an International Association that is based at University of Porto, and proposes a new global legal framework based on new knowledge about the functioning of the Earth System.
He is a member of Task Force on Earth System Law, of the Earth System Governance, Ethics Specialist Group of the IUCN World Commission on Environmental Law and co-founder of ELGA – Environmental Law and Governance Association. He was one of the founders of Quercus - National Association for the Conservation of Nature as well as co-founder and member of the General Counsel of the Portuguese NGO, ZERO - Sustainable Earth System Association. He is currently a Counselor of CNADS - National Council for Environment and Sustainable Development.

Dr. Magalhães contributed with classes for Module 6 of the MOOC “The Earth System as a Global Common”.

The Earth System as Global Common